Last December, as I prepared to take on a new job in the new year, it dawned on me that it might be my last opportunity to get away for a little while. (That turned out not to be the case, but how cute is it that I momentarily thought so??)

A week later, I was on my way to Bologna, a city that had long captivated yet somehow eluded me. The capital of Emilia-Romagna in northern Italy, it’s earned a reputation as the gastronomic center of Italy. Think about that for a moment. In a nation renowned for its cuisine, Bologna is the cream that’s risen to the top. It’s said that if you ask an Italian where to find the best food in their country, they’ll name two places: their hometown… and Bologna.

So, after a quick packing job that included some loose pants and a belt with a couple extra notches, I was on a flight to Rome.

My goal during my brief stopover in the capital was simple: to seek out the increasingly disappearing cucina romana. I found what I was looking for at Armando al Pantheon , a restaurant in the shadow of the nearly 2000 year old Roman temple (and a rare exception to the otherwise unbreakable rule: never eat in the shadow of a tourist landmark). A small family run restaurant dating back to 1961, the menu pays homage to the Roman classics: artichokes with burrata; cacio e pepe (the most Roman of pastas); veal saltimbocca; and pears and prunes stewed in red wine to aid with digestion. The Romans thought of everything (except how to stop their empire from falling). 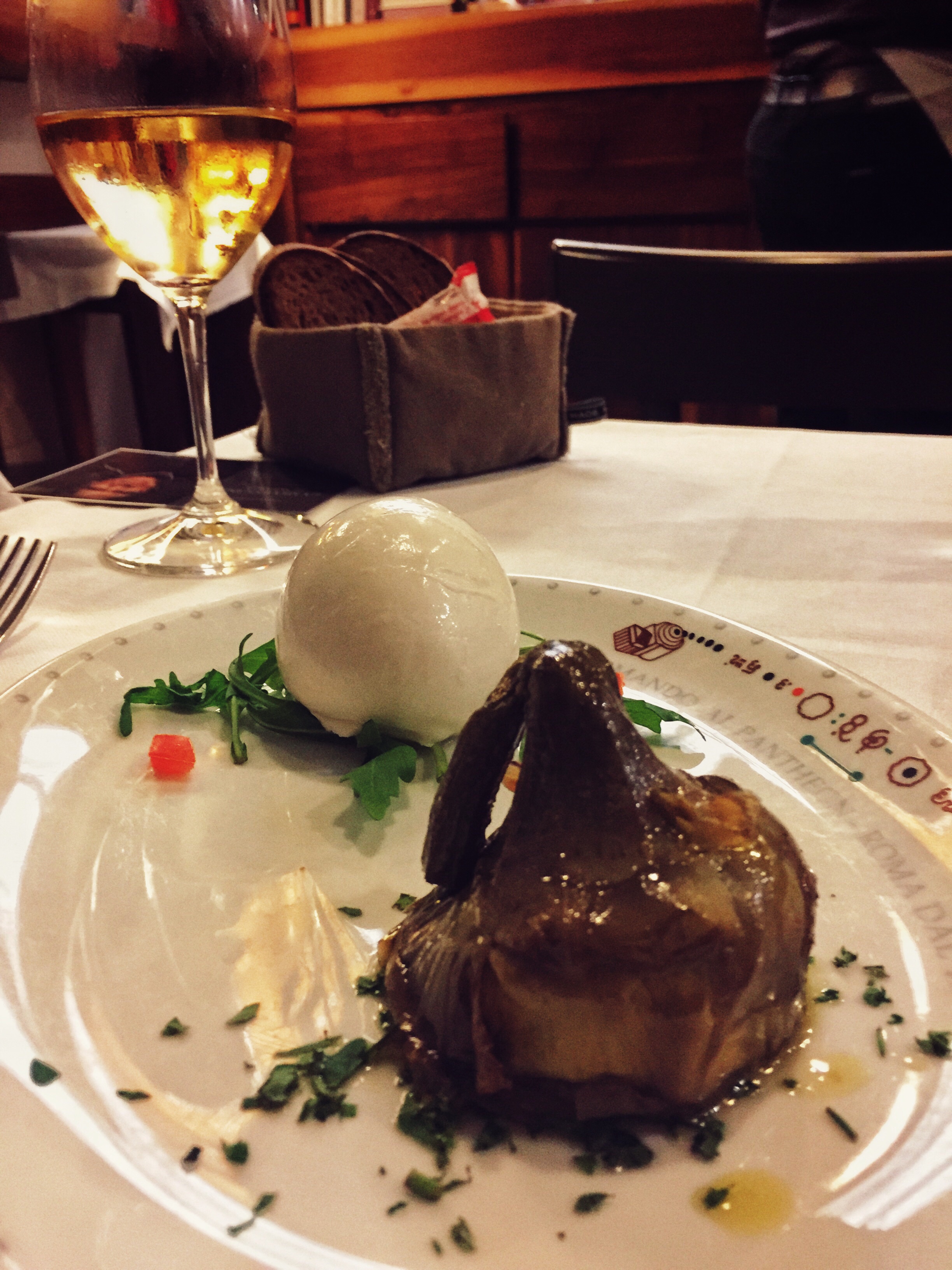 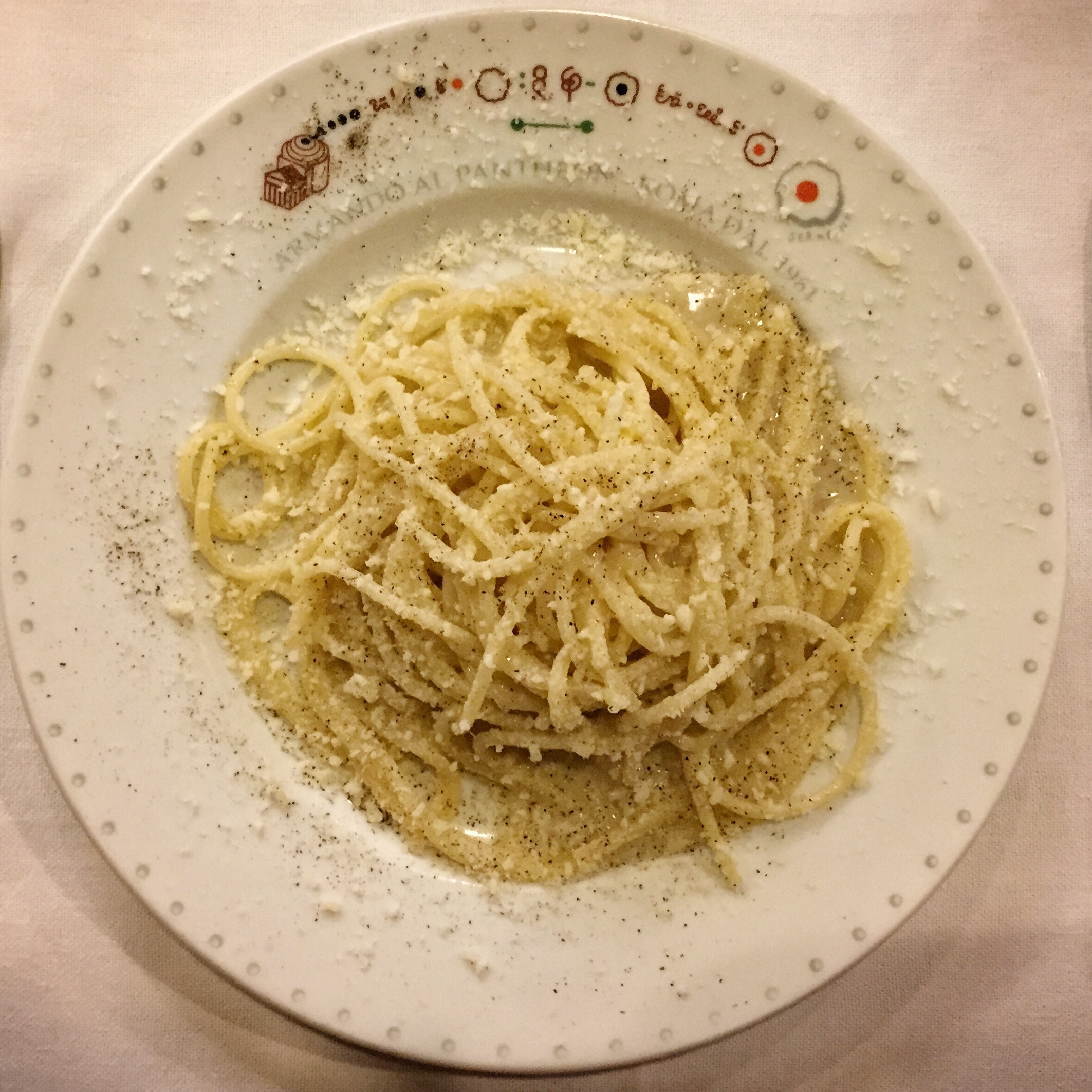 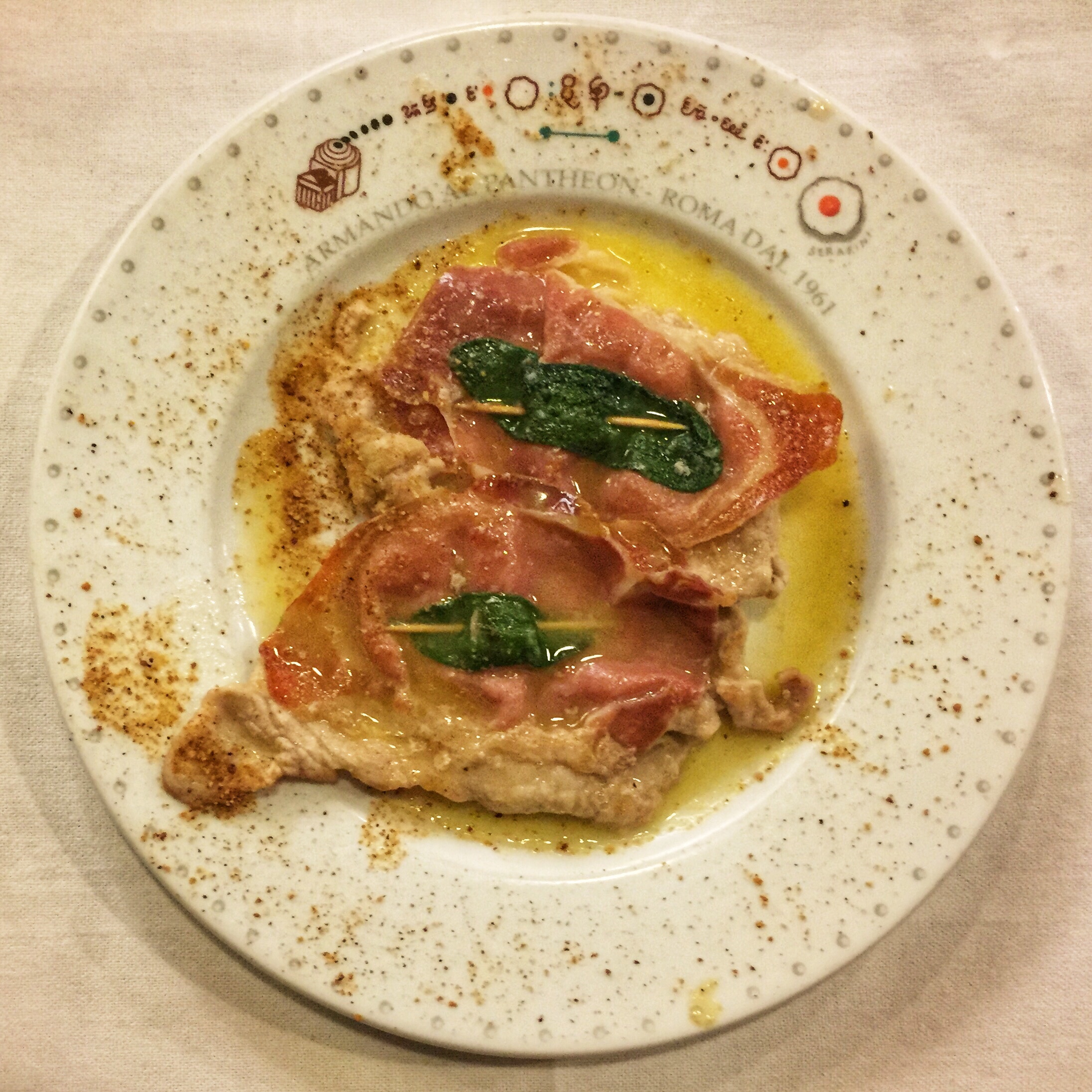 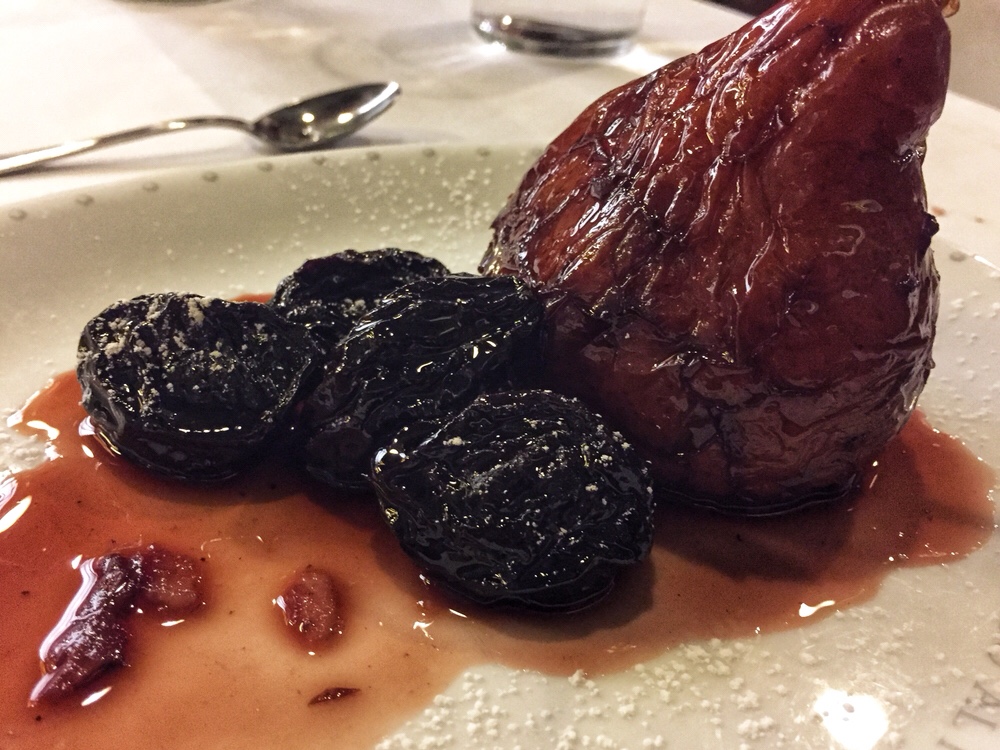 In the morning, perked up by a cappuccino and with a few slices of Roman pizza — from Suppli, a hole-in-the-wall in the Trastevere neighborhood — leaving a grease stain in my bag, I hopped a train north. 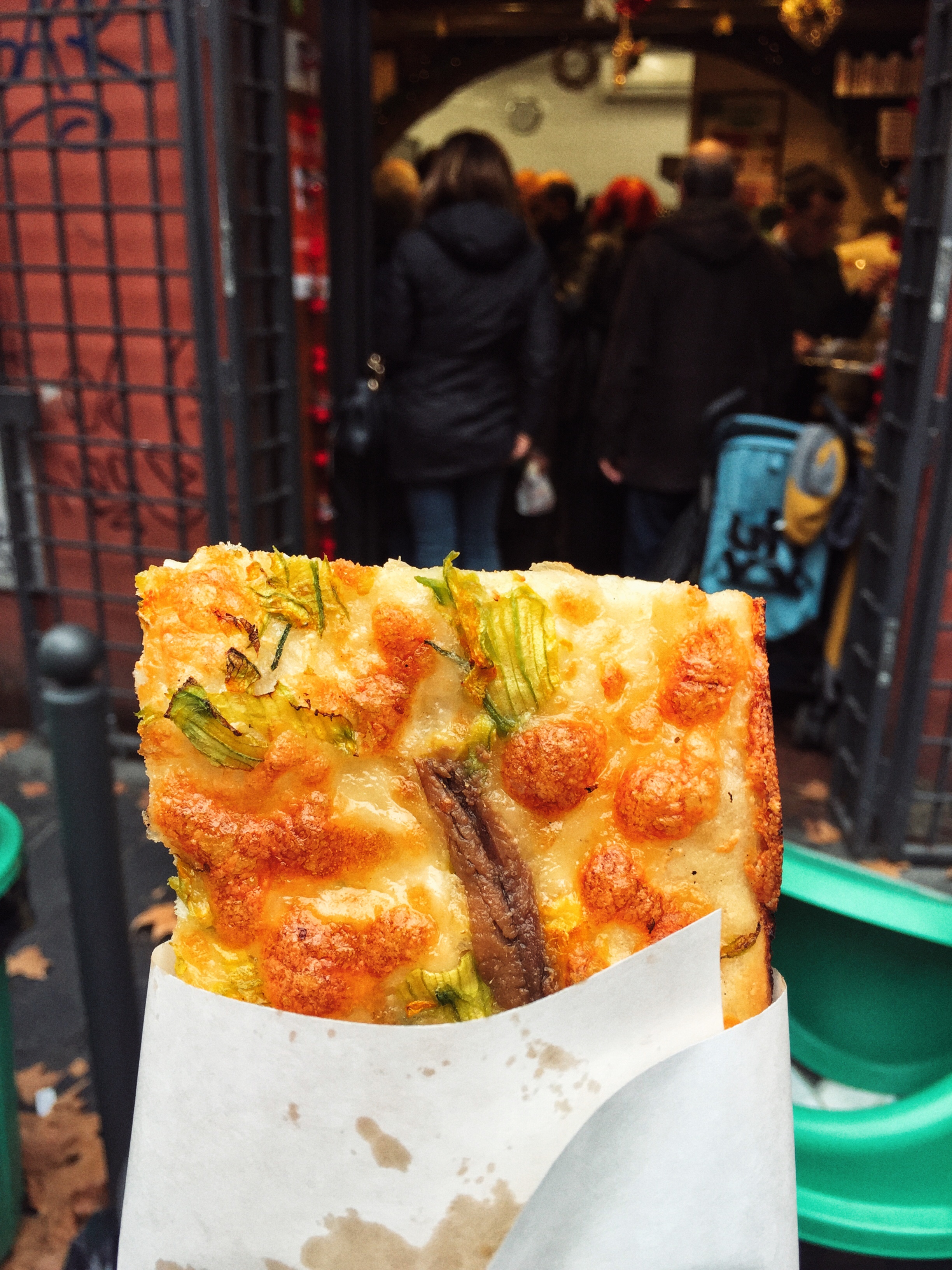 Undoubtedly there are cities in Italy with more to see and do. Churches and castles, priceless art and all that crap. Bologna has an understated appeal. It’s a working city, a university town. Dueling towers loom over a historic center lined with miles upon miles of porticos. 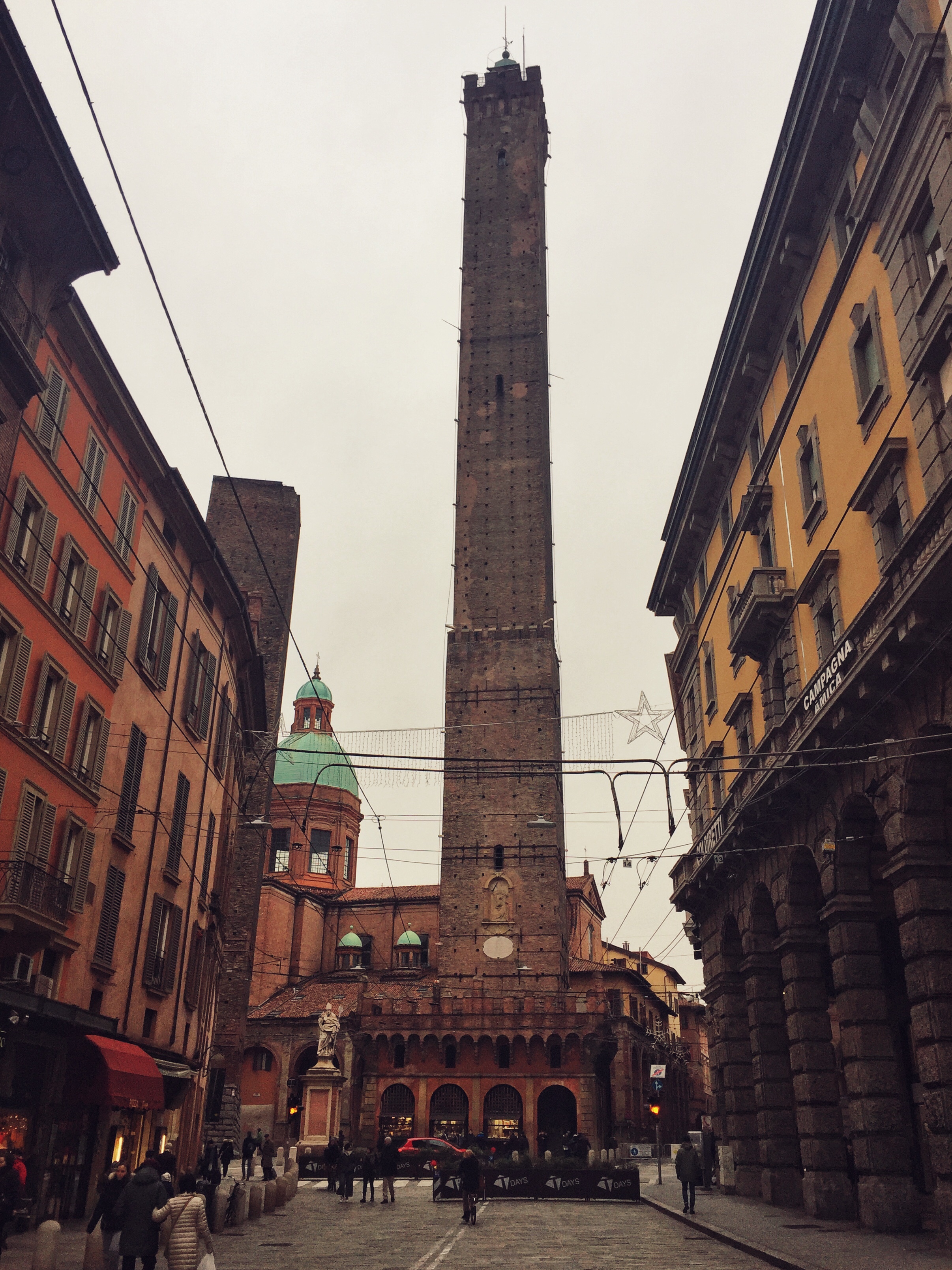 After checking into my Airbnb right off the Piazza Maggiore, I dove headfirst into the city’s eponymous dish. Unlike its distant American cousin, a tomato sauce studded with meat, ragu alla bolognese is a meat sauce with tomato notes. The recipes vary, but the outlines are similar. Carrots, celery, and onions sweat it out to make an aromatic base. Then comes the ground meat — beef or pork or why not use both. Pour in a little wine. And here’s the unexpected part: a tablespoon of tomato paste. Not a can. A spoonful. There’s a lively debate over the use of dairy. (The instructor of the cooking class I’d take on my final day rolled her eyes at the notion of adding cream.)

The result is earthy and complex, a miracle of slow-cooked flavors melding together into a rich ragu. That ragu is always, and I do mean always, served atop freshly made tagliatelle and then topped with that other Emilia-Romagna staple: Parmigiano Reggiano, the (undisputed) king of cheeses. 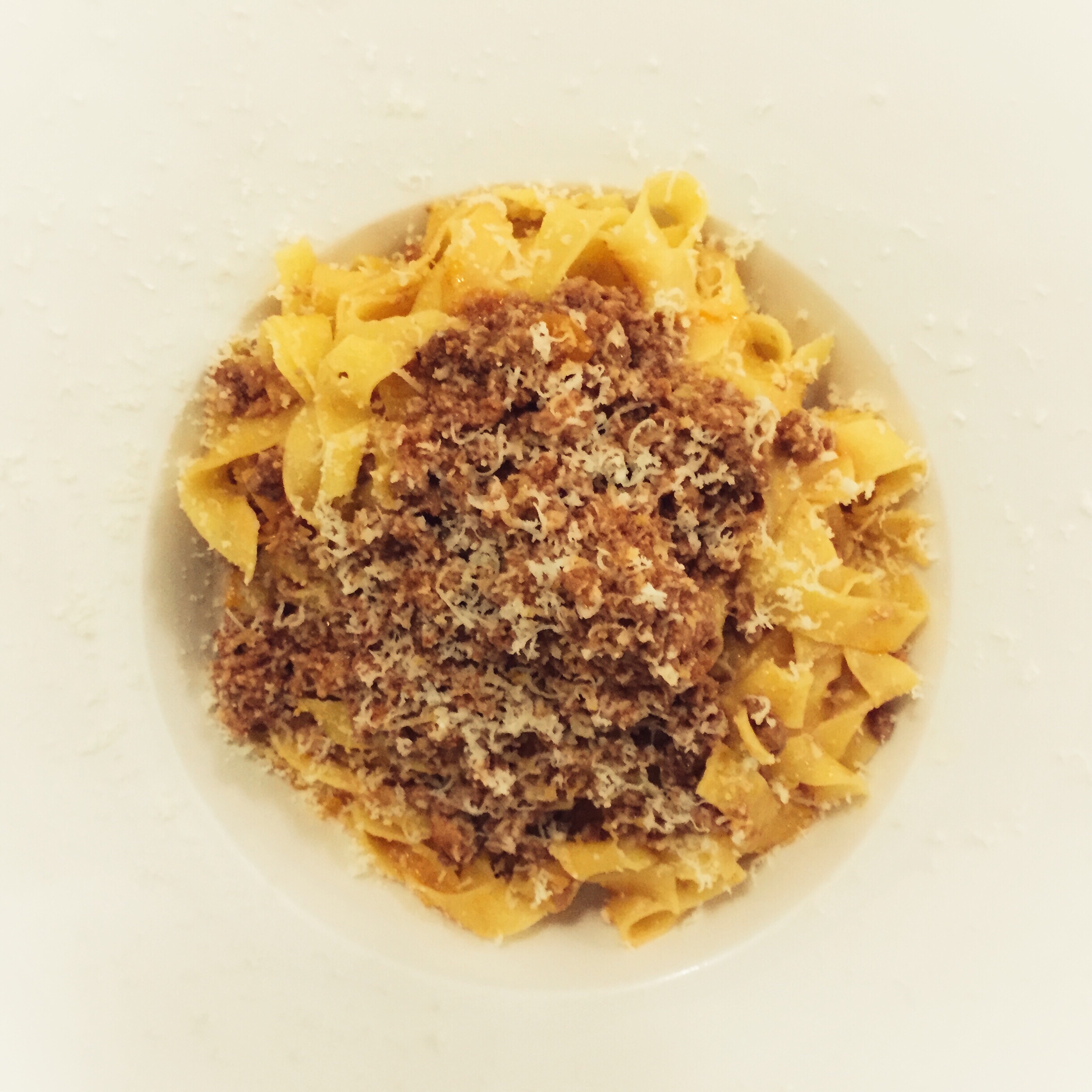 Fresh egg pasta. Bolognese. Parmesan cheese. Emilia-Romagna’s gifts to the culinary world don’t end there. Bologna also gave us the greatest bologna in the world, mortadella. Lasagna may not have been invented here, but the version we know and love today was. And let’s not forget about balsamic vinegar.

Tortellini was also born here and rivals the ragu for culinary supremacy. 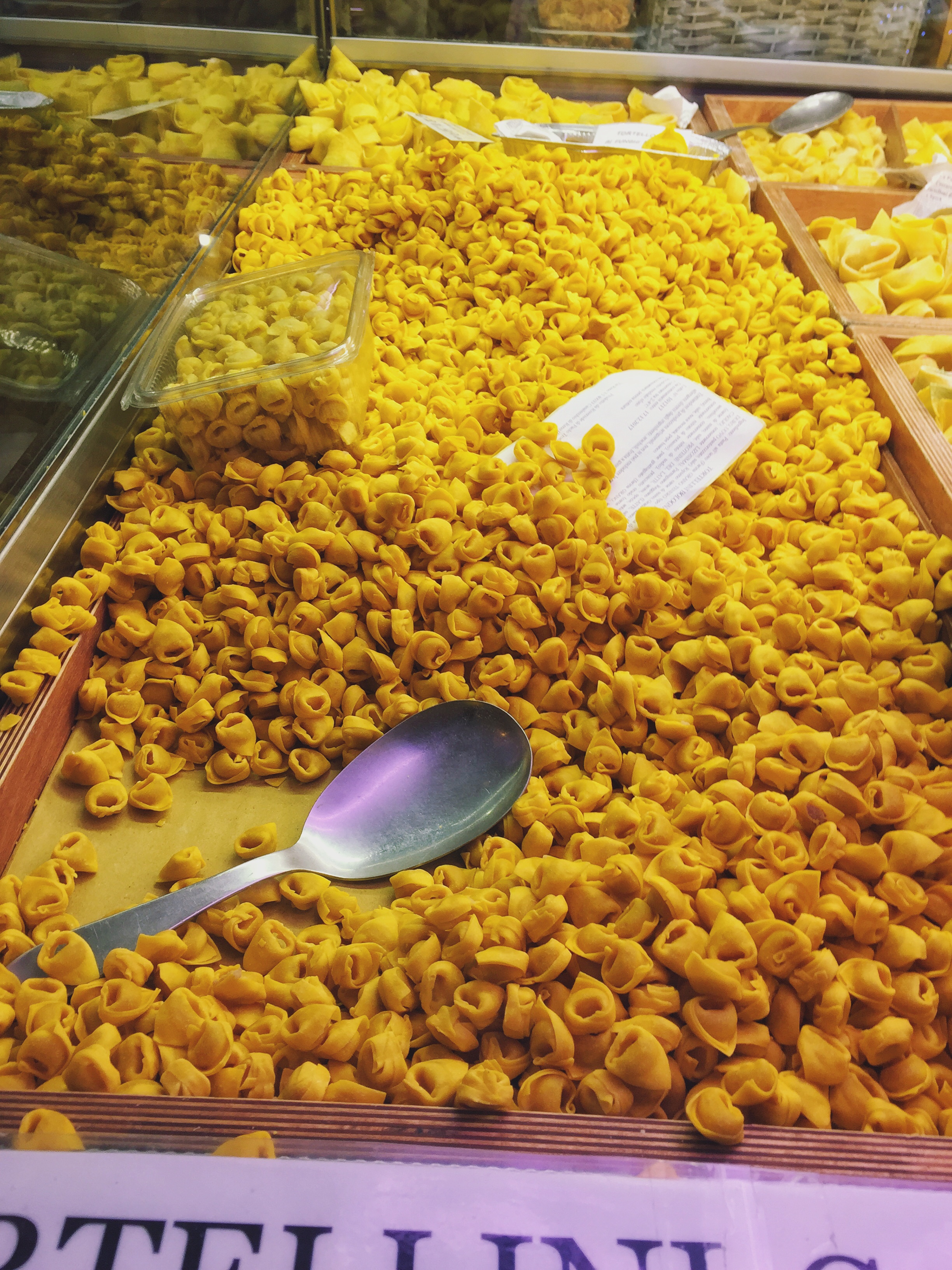 Among the best preparations is tortellini en brodo, where the freshly-made cheese-filled dumplings are immersed in a delicate chicken broth. My server’s query as to whether I wanted it topped with freshly grated parmesan cheese elicited a mild giggle. 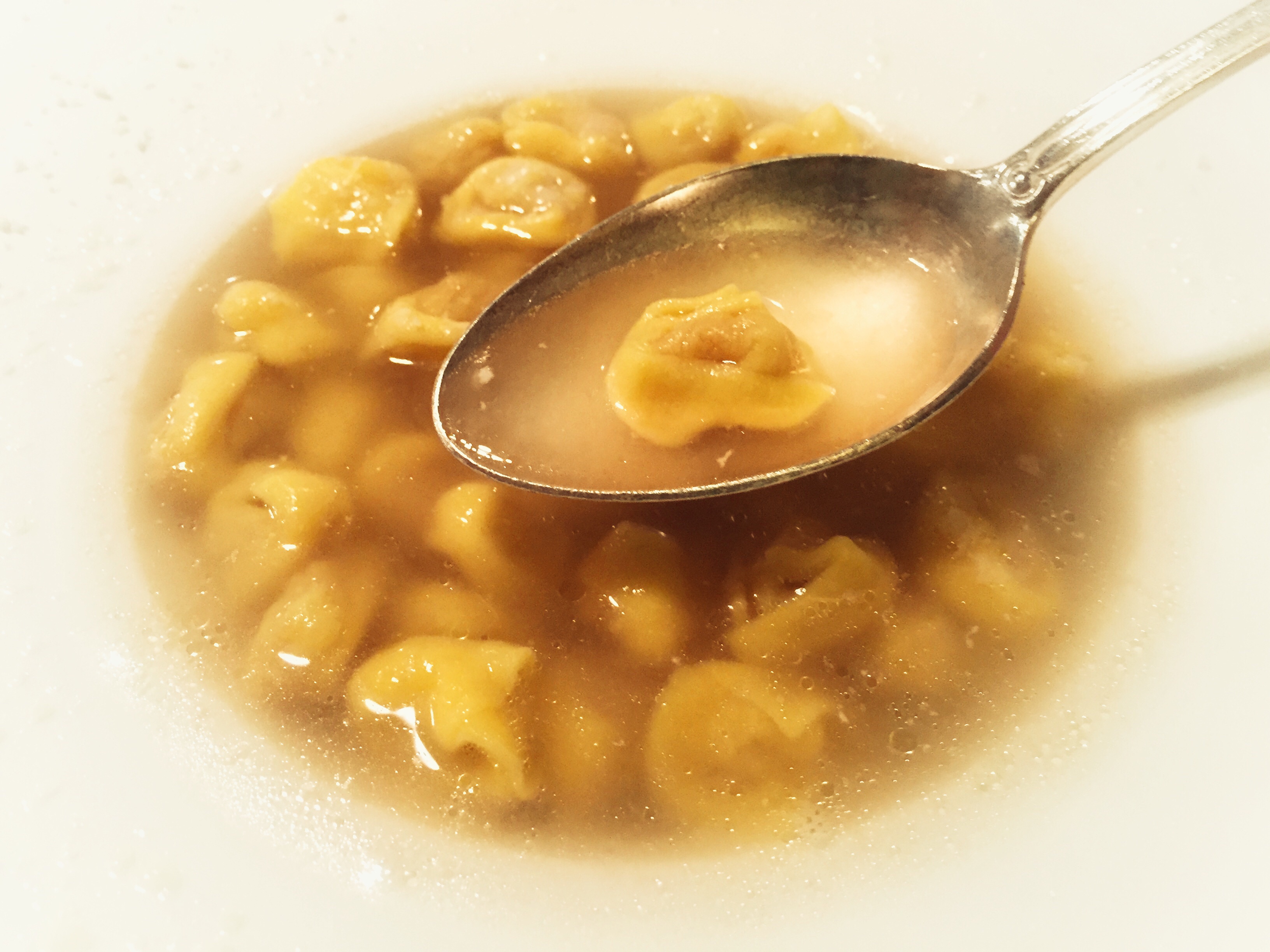 Eating your way through Bologna doesn’t come without its challenges. By the end of my 4-day visit, I was desperately craving roughage. Which seemed odd, seeing as how Emilia-Romagna is a rich, fertile region, and a walk down the market street is overflowing with its bountiful harvest of vegetables and fruits. 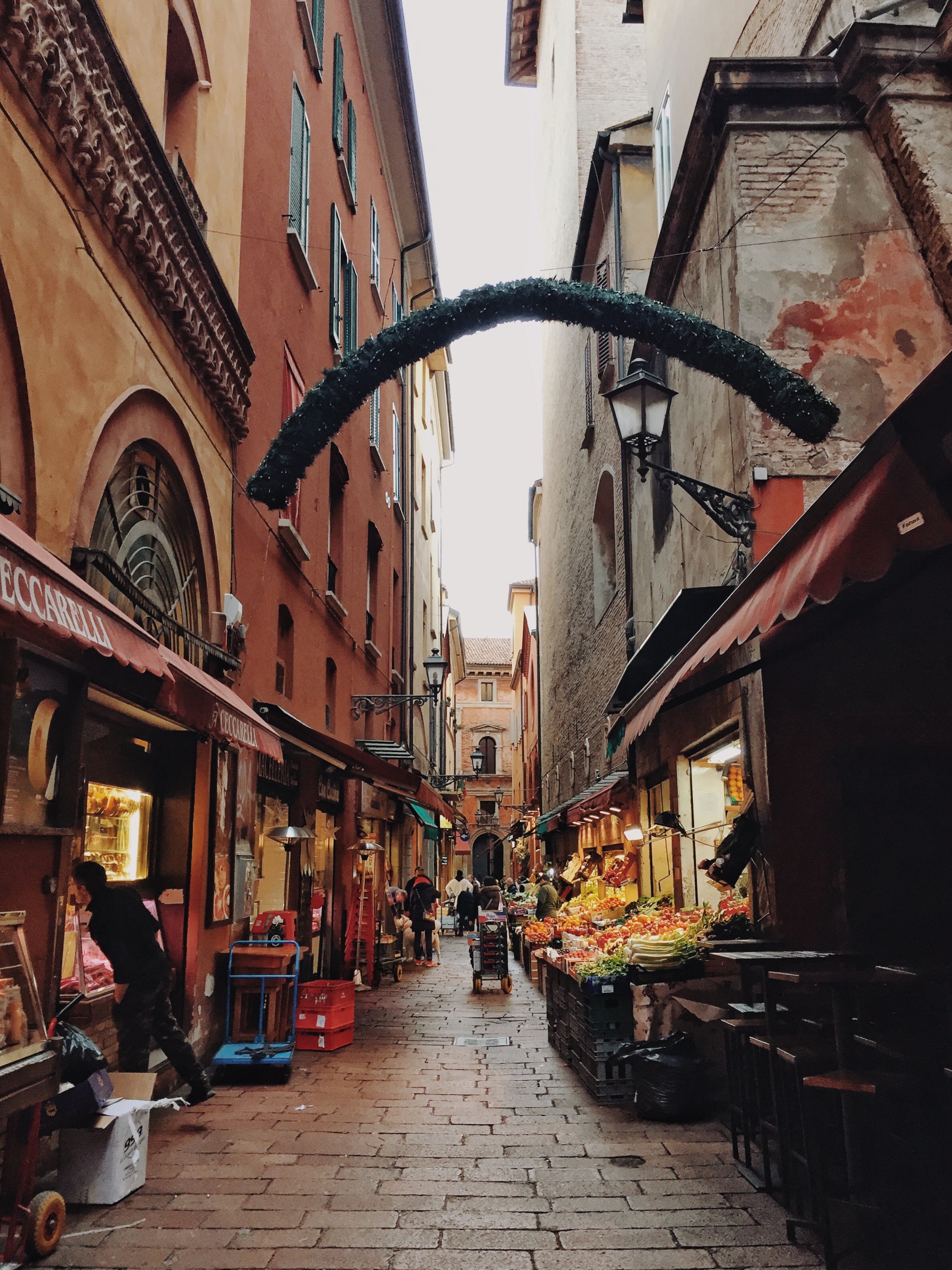 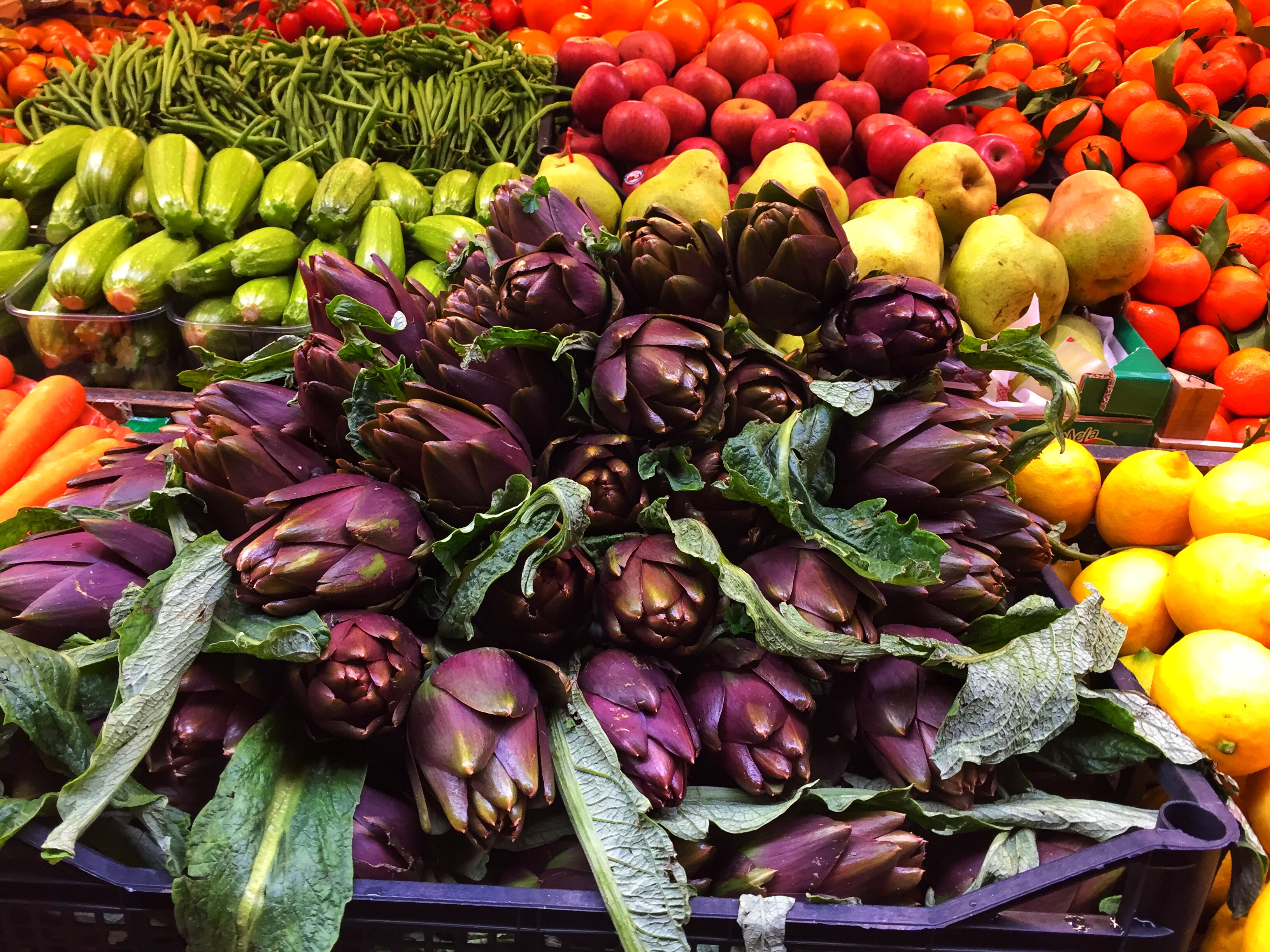 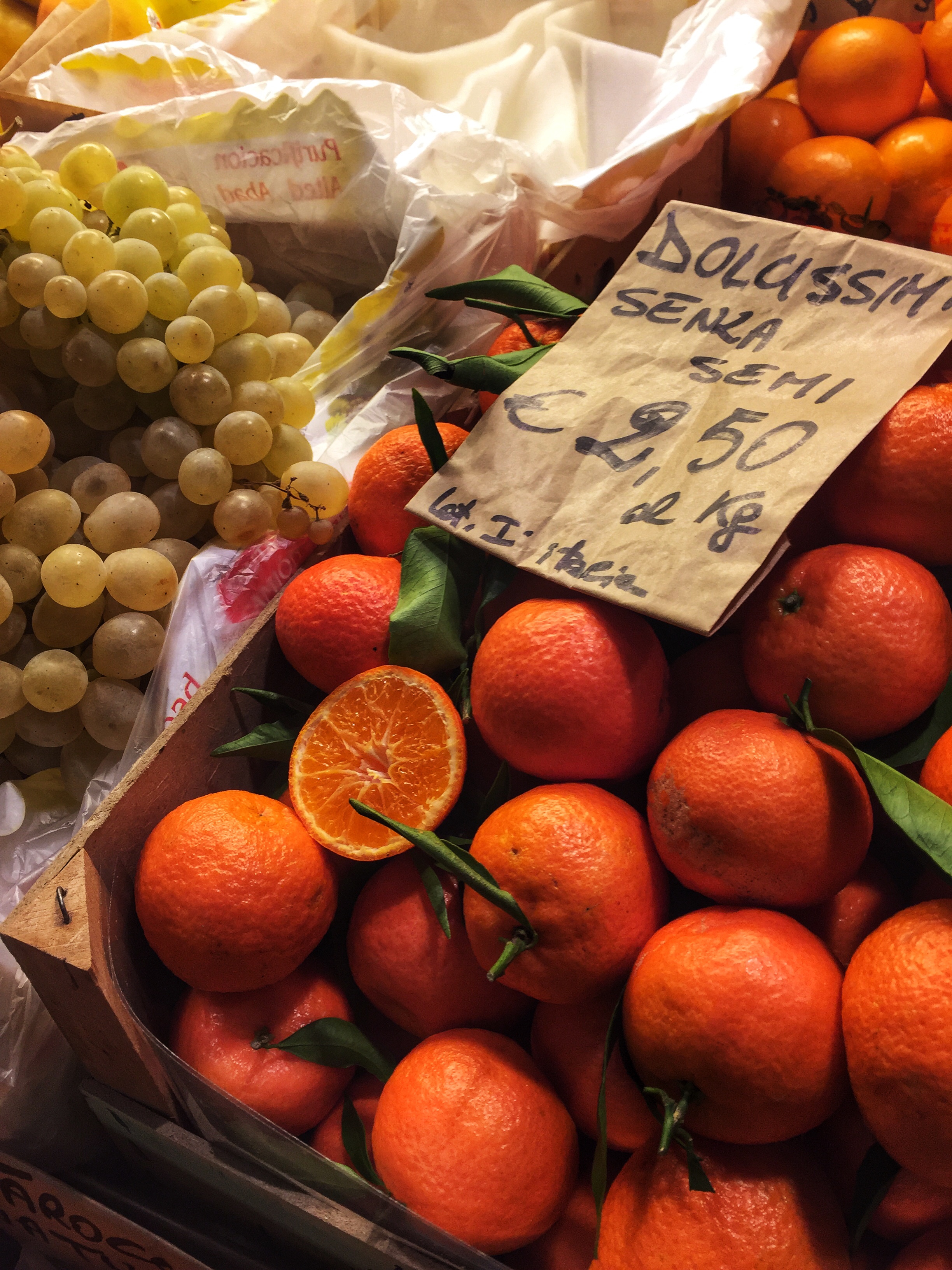 But you wouldn’t know it from their menus. My lone attempt to order a salad resulted in a pile of fried pork fat on a bed of greens. Of course, it would have been rude not to finish it. 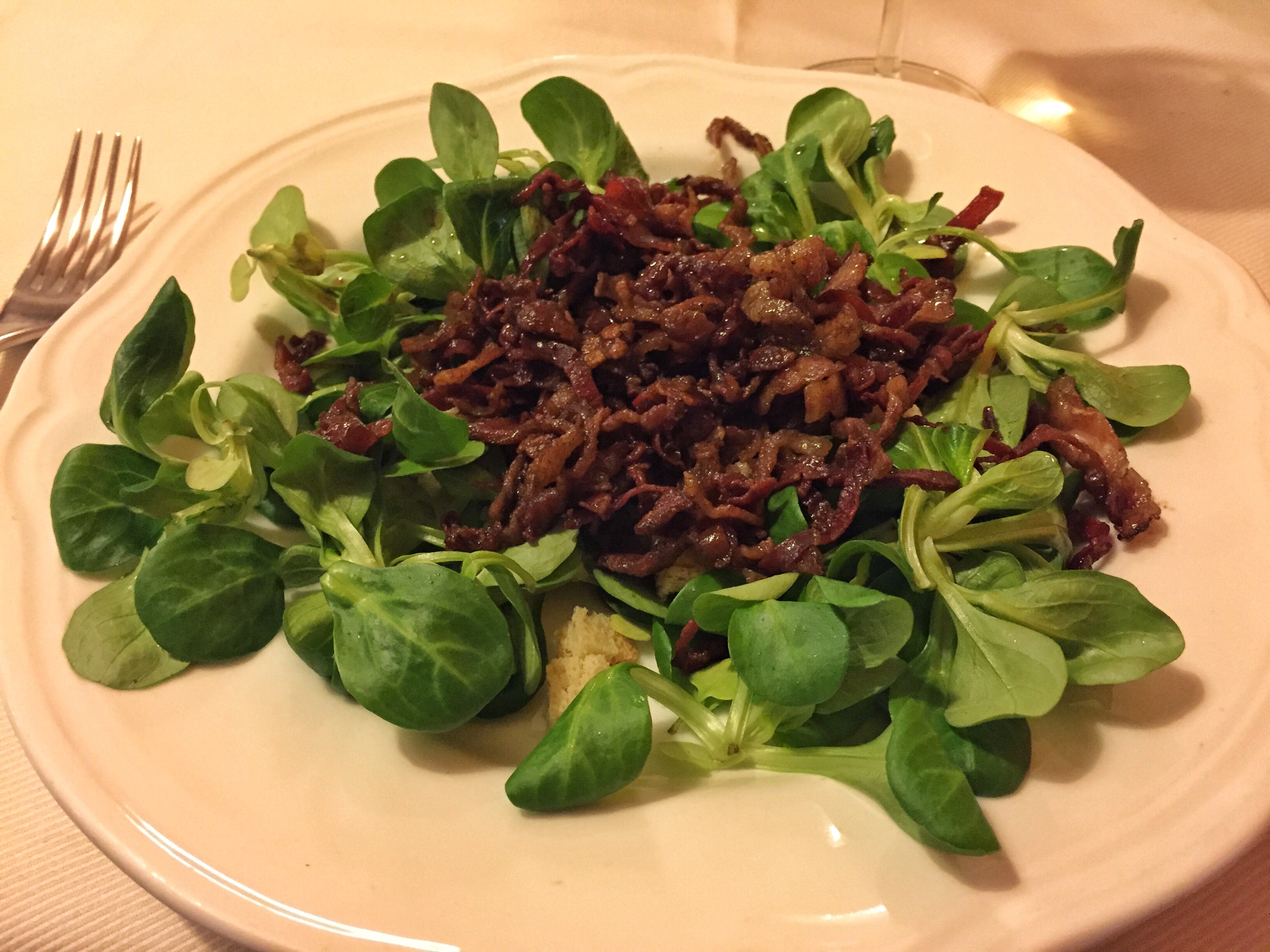 Another challenge came in the late afternoon when I invariably required a snack before dinner. A sampling of cured meats. Maybe a few bites of cheese. You know, a small snack. Please make me your smallest plate, I’d tell the server. The result would always look something like this. And it would be wasteful not to finish… right?? 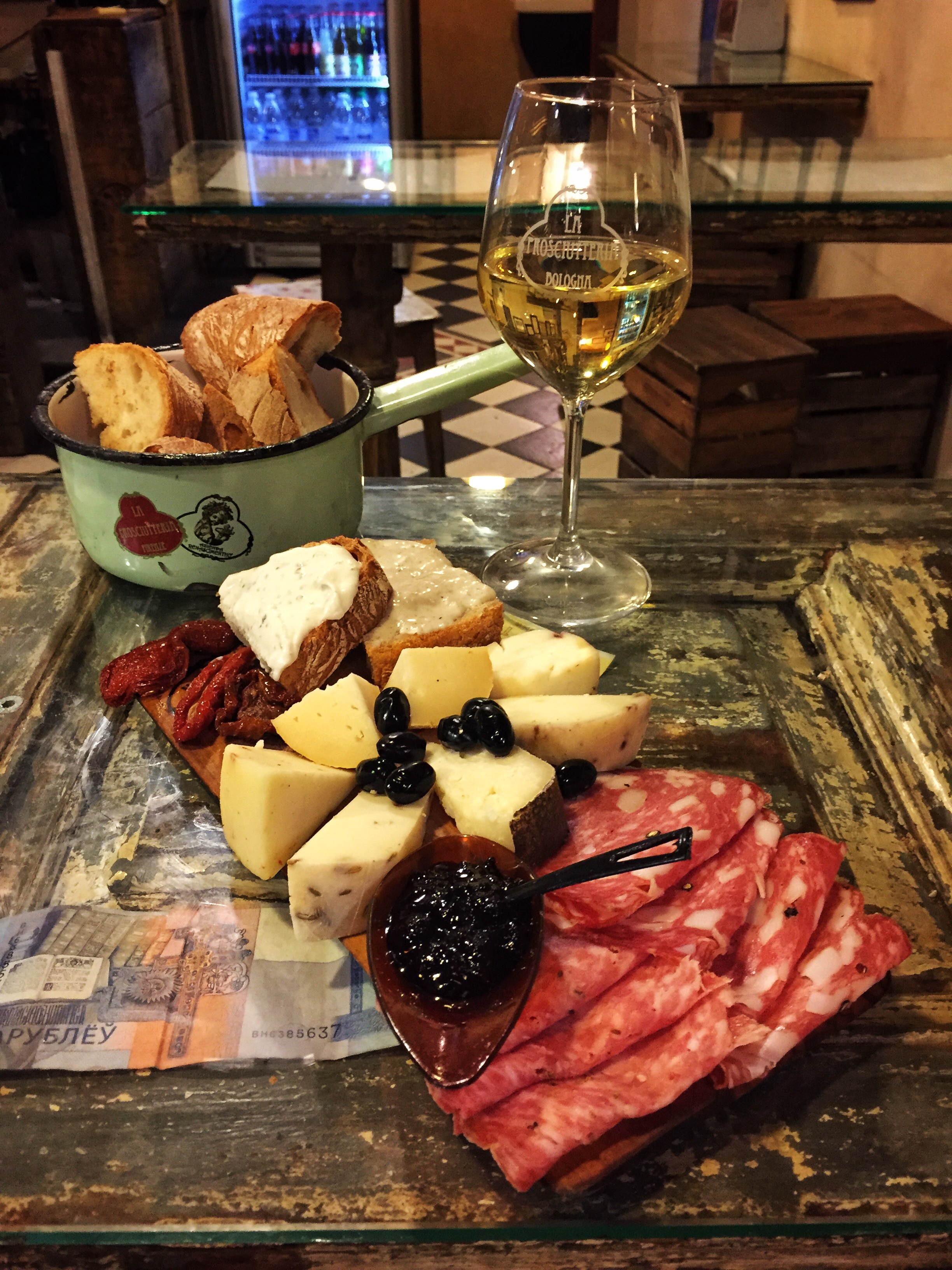 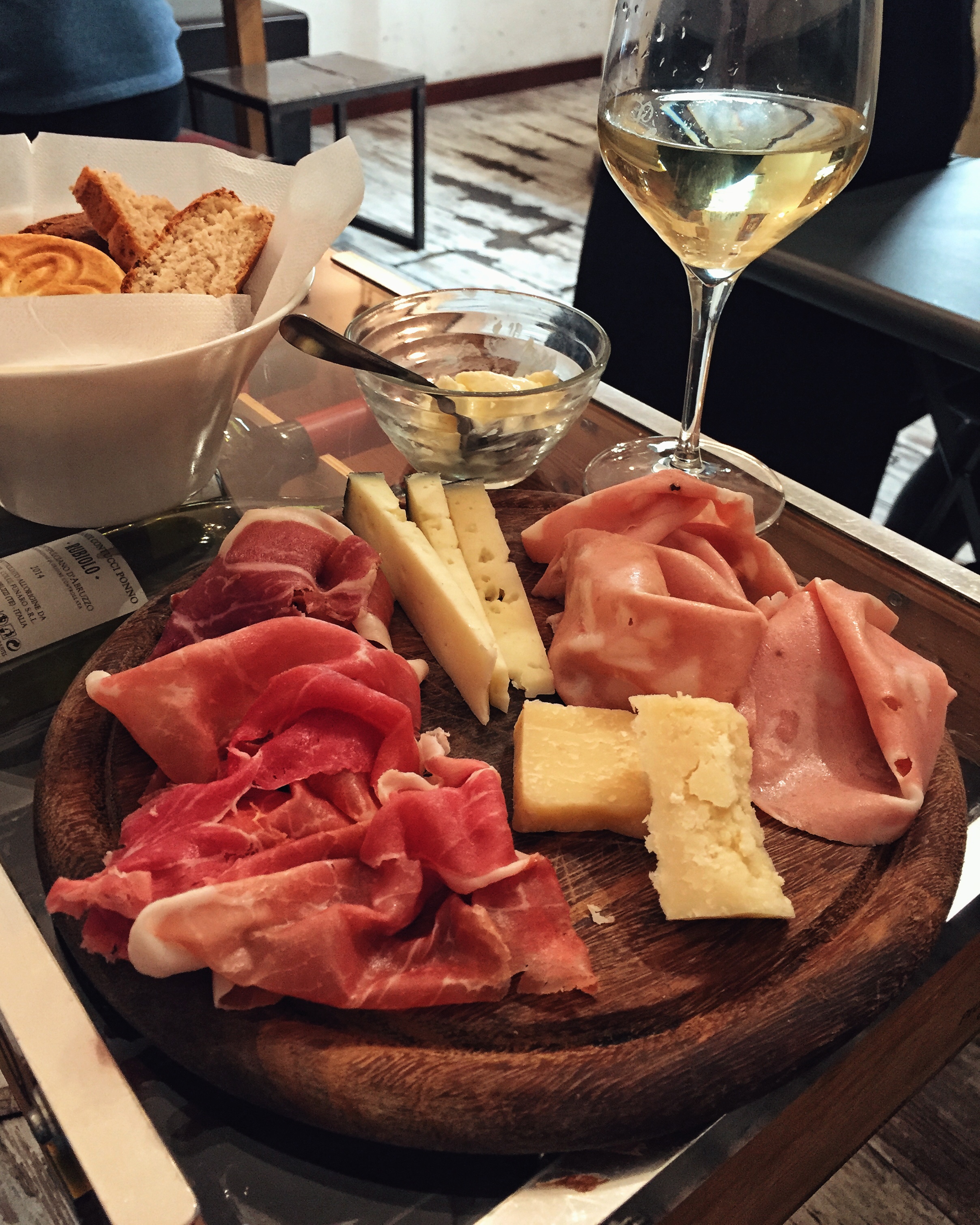 Breakfast being the most important meal of the day, I liked to start mine off with two. Bologna is a bustling regional capital, so toss out your romanticized notions of idling away the morning at a quaint cafe. In Bologna, breakfast involved elbowing your way up to the counter, downing your cappuccino and pastry, and getting on with your day. 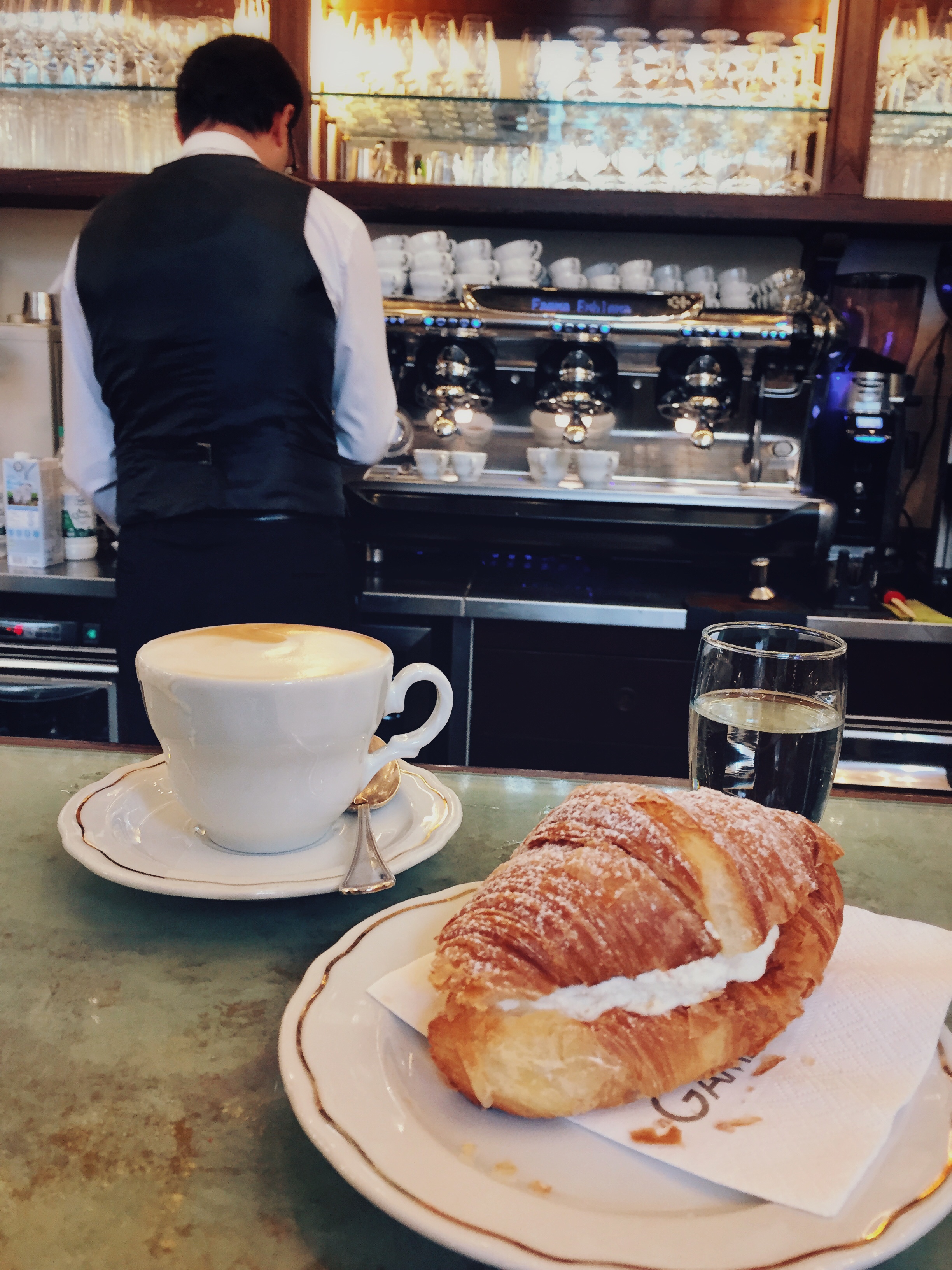 To blend in, I liked to pretend to read the local paper. 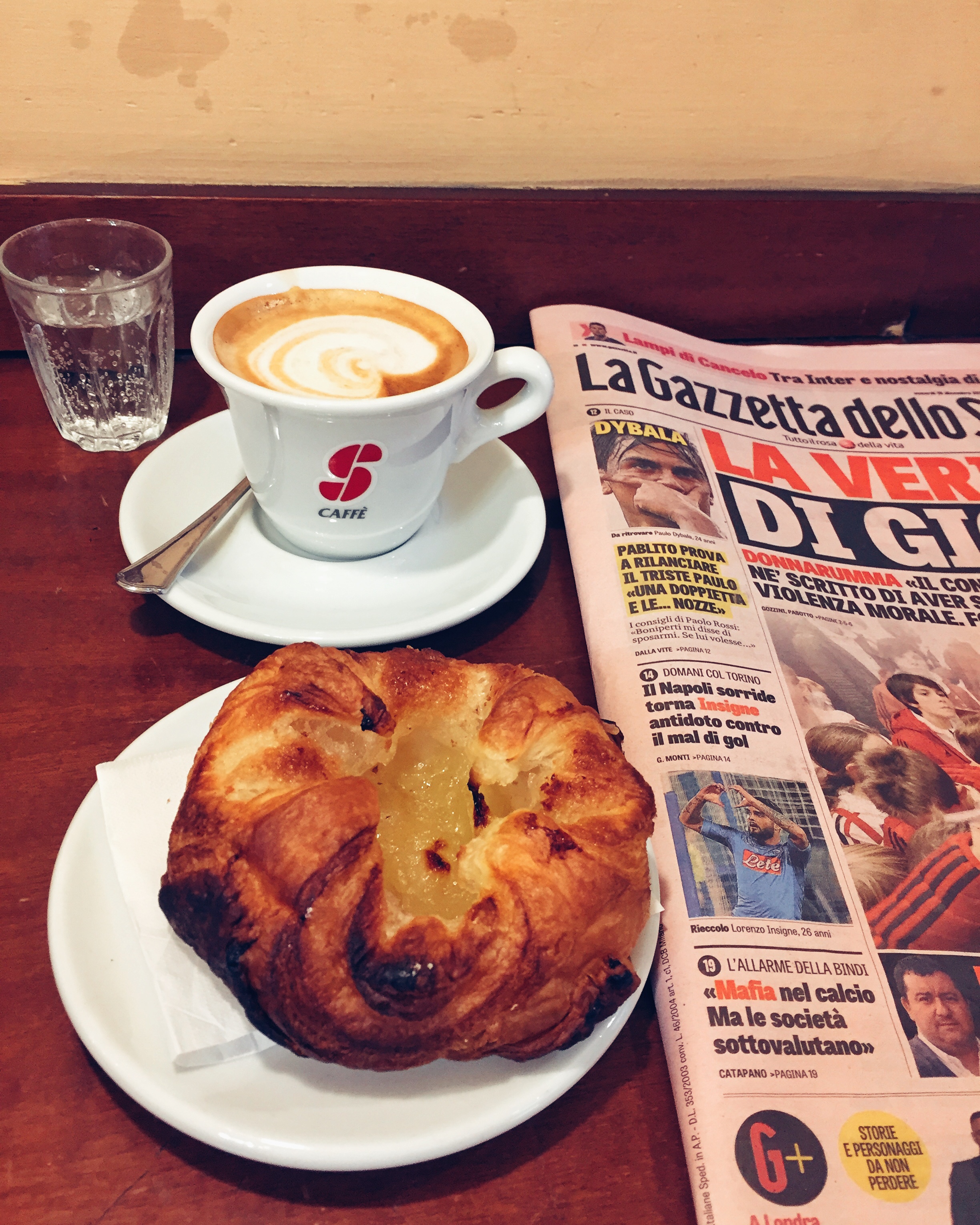 When I feared I’d eaten everything in Bologna and began to lose all hope, I was forced to fend for myself. Il Salotto de Penelope offers top-notch cooking classes for half the euros of its costlier competitors and includes an insightful tour of Bologna’s bustling market street, where we picked up the meat for our ragu and pumpkin filling for our tortelloni. The tagliatelle was surprisingly easy to make and if anyone is looking for a last-minute Christmas gift for me, I’ll take a 20-inch rolling pin. The gnocchi, on the other hand, were quite temperamental. I’m certain that with a bit of practice, I’ll eventually get the hang of them, but for the time being I found them all but impossible to form. Served with a simple tomato sauce, they still came out tasty. Our final pasta was the tortelloni — which proved a little easier for novices to shape that the smaller tortellini — served with a brown butter sage sauce. (Click here for the recipes for the tagliatella and bolognese sauce.) 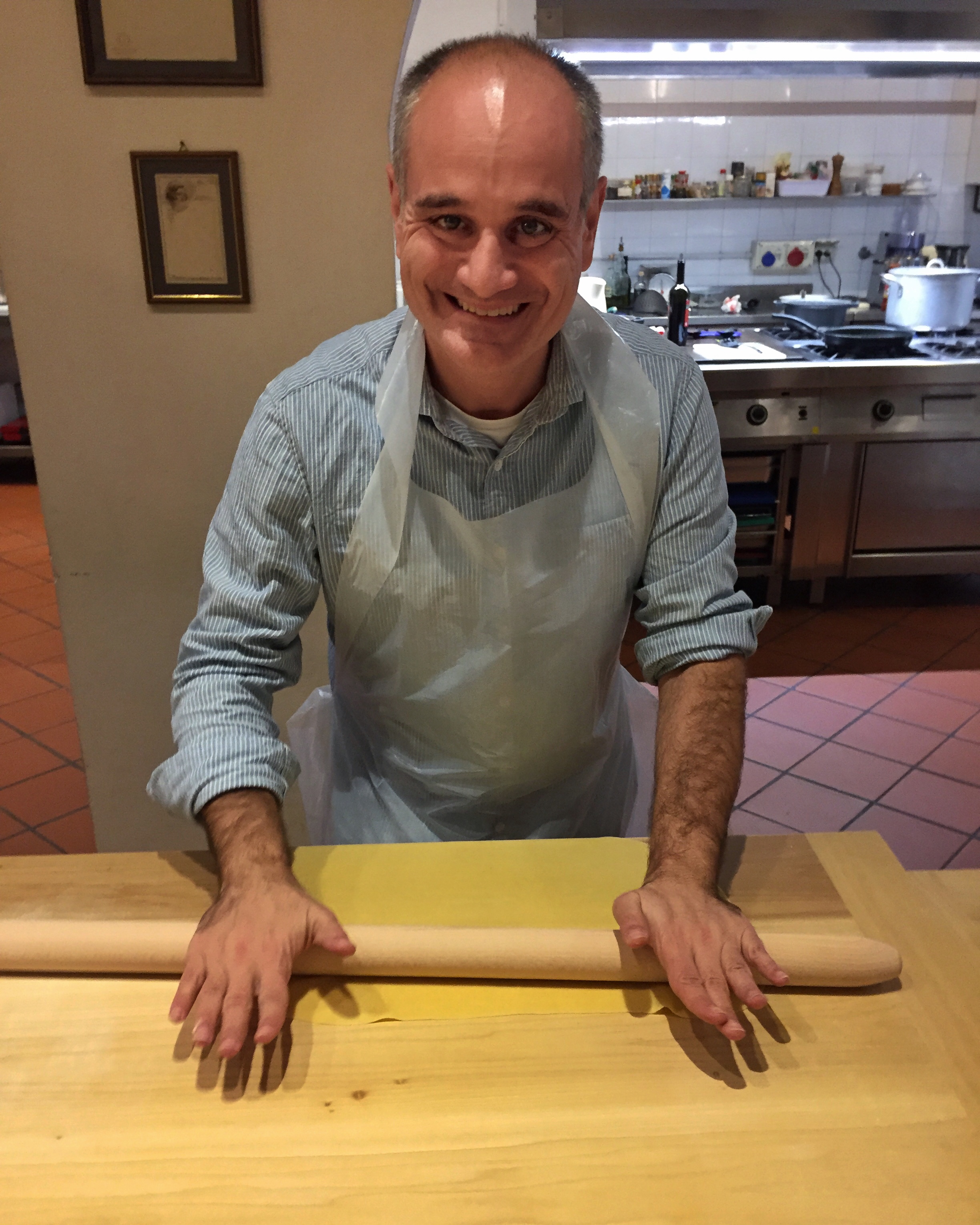 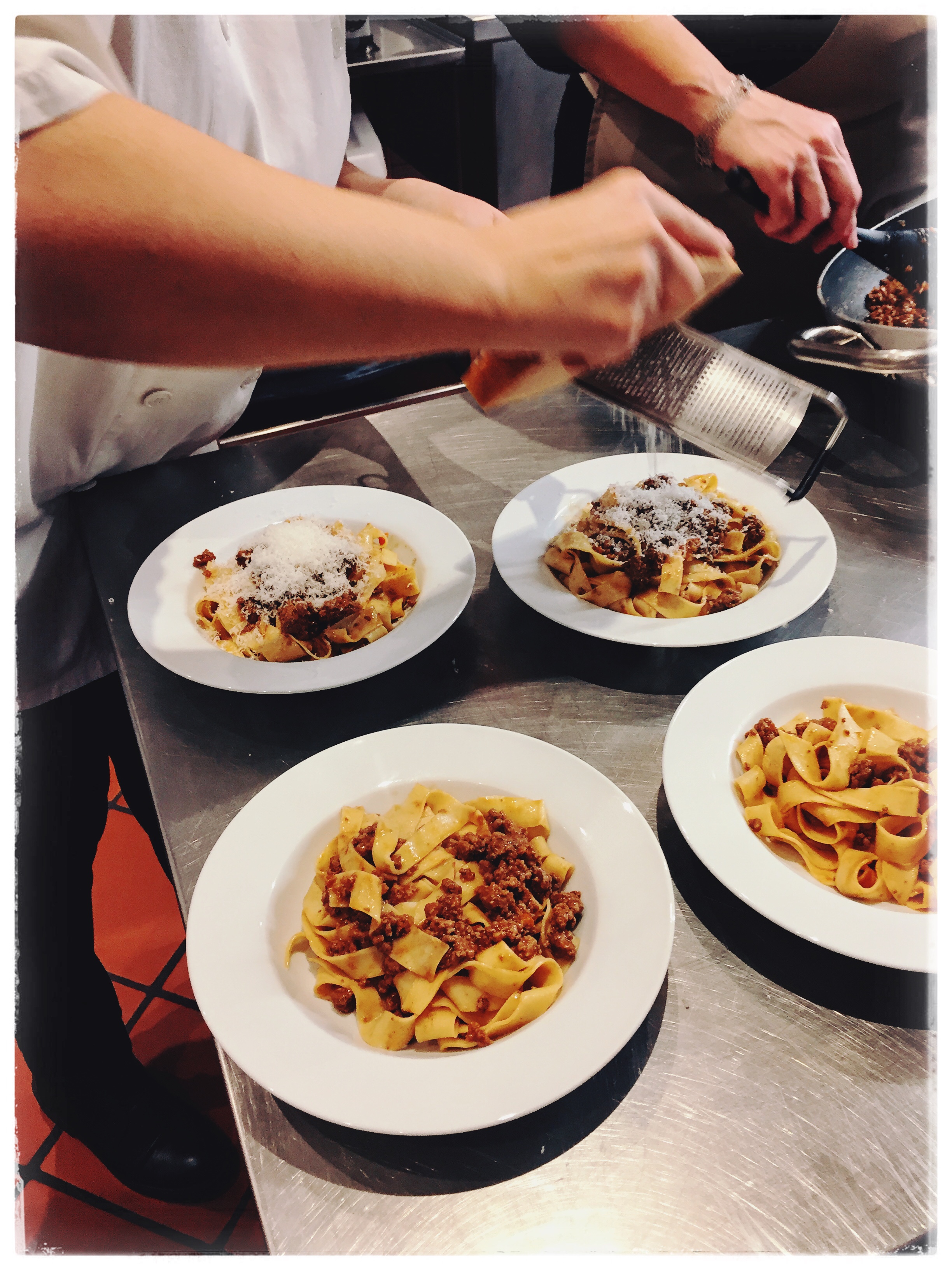 My final dinner in Bologna found me at Al Sangiovese, just off the Piazza Maggiore. The restaurant was featuring a Christmastime white truffle menu. I started things off with a cheese flan with a creamy Parmigiano Reggiano sauce and white truffles… and ended with the most delicious, decadent panna  panna cotta of my life. 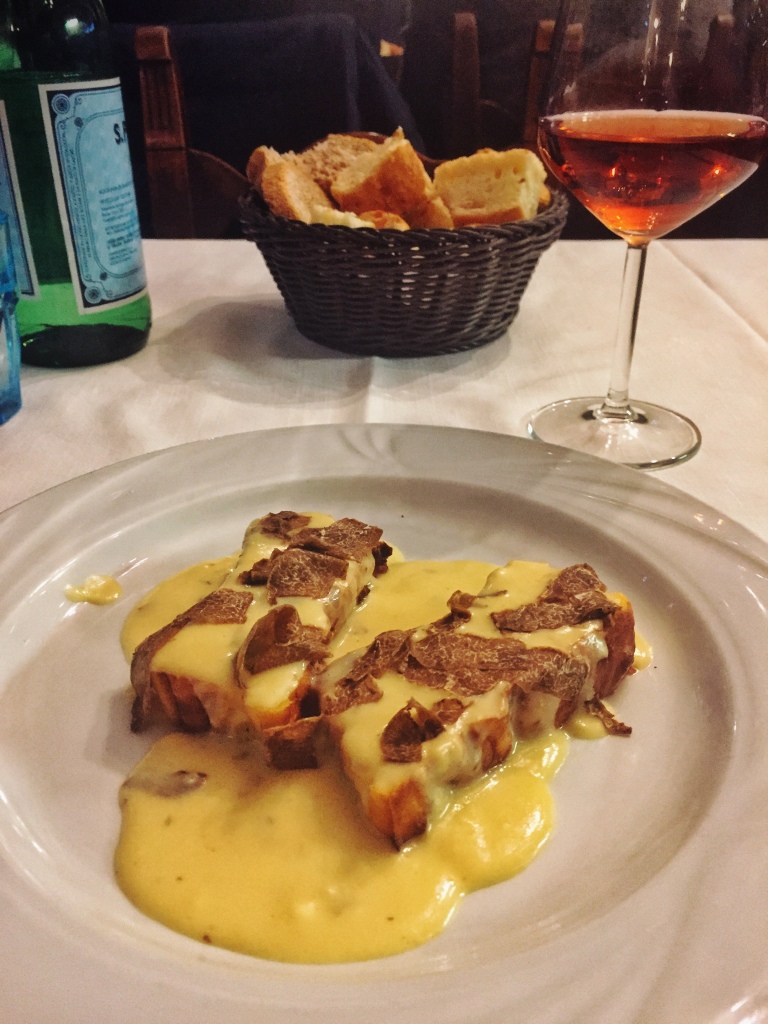 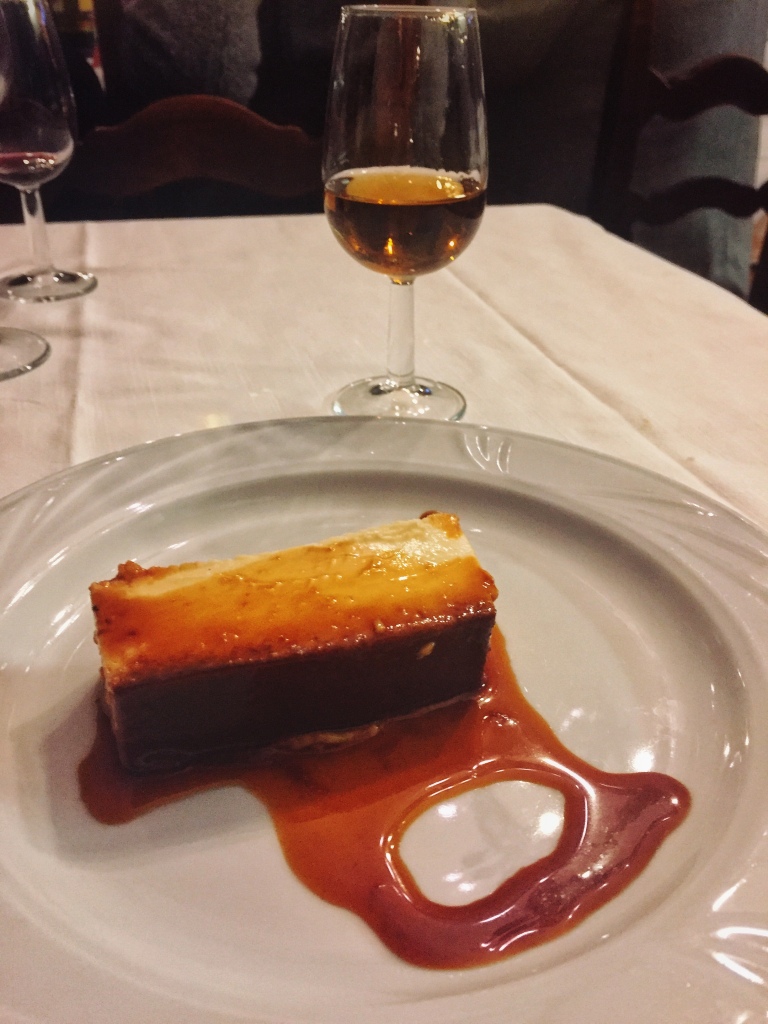