By now you surely know of our struggles to get our hands on some cold hard rupees. Turns out, that was nothing compared to our struggle in turning those rupees into ice cold beer.

You see, Kerala is going dry… words I still shudder to write more than a month later. The reasons don’t appear to be religious, but rather an overreaction to Kerala’s unenviable status as India’s top imbiber of alcohol, with all the corresponding social ills that follow: domestic violence, drunk driving, listening to Coldplay.

Now I’m not heartless to these concerns, but first, prohibition doesn’t work, something we Americans know a thing or two about, and second, cycling is proven to make you parched and after a long day in the saddle it’s my right as a Vishnu-fearing non-Hindu to have an ice-cold Kingfisher, maybe two, or was it ten… alcohol impedes arithmetic as well.

Having ignored the warnings in our Lonely Planet, reality set in quickly that first night in Kovalam. I ordered a beer with my dinner and am pleased to report it arrived promptly — in a paper bag, placed on the floor under the table, and served in a coffee mug.

And that was the best case scenario. As we cycled throughout southern India, our greatest challenge day in and day out was procuring a cold one at the end of the day. Without exception, not a single one of our hotels served beer. That meant buying it elsewhere, which typically involved having our driver Jamal go on a beer run. (Where he got it, we don’t know, and how much money he skimmed off he top, we don’t really care.) Having at last scored some warm beer, all we needed was a fridge to chill it and a place to drink it. Easy enough, right? Once again, our hotels, which lacked a basic liquor license, offered little more than a helpless head shake. We couldn’t drink in their common areas, or bring them with us to dinner, or even refrigerate them. Banished from decent society, we took turns hosting each other in our rooms. (Jamal saved the day yet again, allowing us to use the cooler in his van to cool our contraband.)

This isn’t to say there were no bars in southern India and we never gave up our search — leading to mixed results. Which brings us to Kodaikanal, an old British hill station perched at 7,000 feet, high atop the Western Ghats. It was the site of our first rest day from the bikes and, sadly, proved to be one of the driest places along our route. We got wind that there was a bar at a nearby hotel so after dinner a few of us ventured out for a nightcap.

Little did we know we were walking into the single worst bar any of us had ever come across.

Located in the hotel’s ill-lit basement, it was filthy and reeked of urine. The beer sat warm atop the bar. When we asked for cold beer, the bartender brought us some very mildly chilled Carlsbergs. The glasses were dirty, but when someone pointed this out, the bartender proceeded to go back and wash them in suspect water with a dinghy old rag. No thank you, we’ll take our chances drinking straight out of the bottle — after we’ve wiped it with our sleeve! (When Warren arrived shortly after us, he took one whiff and promptly closed the door to the loo. Sigh. If only it was that easy.)

But whatever — the company was great and the experience a memorable one, so we soaked up the, umm, ambience, staying until the bar was about to close and we were asked to leave. As we prepared to stumble back to our hotel, we spotted a sign high above the bar that read “DRINKING LIQUOR WILL RUIN THE FAMILY.” Indeed it will.

So there you have it. From now on, when I say “I’ve been kicked out of worse places than this,” you’ll know I’m serious!! 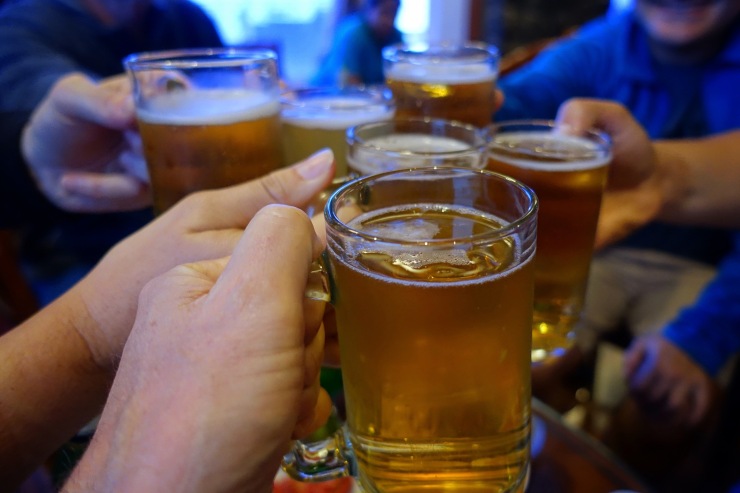