Before I left for India, my mother made me promise I wouldn’t try any street food. This is my confession.

It’s also the story of my last supper — or, to be more precise, my last ten.

With bags packed, ready to catch the final flight of the day (literally), I ventured into Old Delhi to meet Anubhav Sapra, a bonafide foodie with a love for the city’s justifiably famous street food. A few years ago, Anubhav quit his day job, started Delhi Food Walks, and has never looked back.

On this particular night, Anubhav and I had company. A photographer from one of India’s largest dailies joined us to snap shots for a story her paper was doing on food tourism. And so the three of us set off for what would turn out to be the perfect, gut-busting finale to an amazing trip. 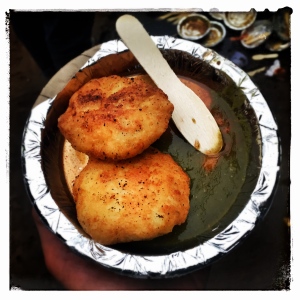 We didn’t need to venture far before we were stuffing our faces. Across the street from the main Sikh temple is Natraj (no relation to the identically named Udaipur restaurant in my previous post), a place that specializes in aloo tikki, a snack synonymous with Old Delhi. Not unlike Spanish croquettes, these deep fried potato cutlets are stuffed with lentils and cottage cheese, and served with both a coriander and a tamarind sauce. Light, cheap and delicious!

With a little sustenance in our bellies, we headed down a narrow, congested alley known as Gali Paranthe Wali. Paratha is a fried bread, a staple of Indian kitchens, and Gali Paranthe Wale (literally “the lane of fried bread”) has vendor after vendor specializing in nothing but freshly prepared paratha. At Pt. Gaya Prasad Shiv Charan, one of the oldest and most famous purveyors of paratha, we ordered two: mixed vegetable and rabri, which resembled a kind of  sweet yogurt. On my next trip to Delhi, this will surely be my first stop!

Next up: daulat ki chaat, which translates to “the snack of the wealthy,” a Delhi treat that only makes an appearance during Delhi’s brief winter (a term I use very, very loosely). This wasn’t a snack at all, but a light, rich desert made of cream, milk, sugar, saffron, and nuts. Foamy in texture, it came across as a meringue that hadn’t been baked. It’s only available in the cooler months (and the mixture is kept on a bed of ice) because its delicate nature will collapse in the heat. Easily my favorite sweet of the trip, I felt truly fortunate to be in Delhi at the right time of year to try it.

After that, we stopped for jalebi. You may recall these ghee-fried syrupy funnel cakes from an earlier post, and my arteries clogged a little just thinking about them now, so moving right along… 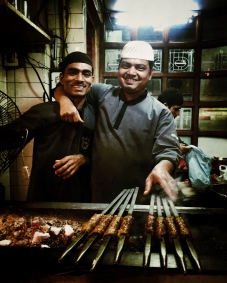 You’d be smiling too if you were grillin’ kebabs! 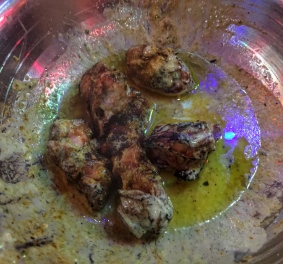 Want some chicken with your butter?

After an (anything but) quick rickshaw ride from Chandni Chowk to the Muslim quarter, Anubhav and I squeezed into a booth at Karim’s — a true Delhi institution famous for its Mughlai cuisine. In a country where non-veg consistently takes a back seat to veg, Karim’s is the exact opposite, with a menu consisting primarily of freshly butchered lamb and chicken. Perhaps their most well known dish is lamb korma. You’ve never had lamb this good. (Truth be told, Karim’s had been my very first stop when I arrived in Delhi a few days earlier — but I was more than happy to pay it second visit!)

At this point, I must admit even my bottomless pit of a stomach was beginning to reach its limits. I knew I would have to pace myself. So this was absolutely the wrong time to discover the greatest butter chicken known to man. Now butter chicken, every place I saw it prepared in Rajasthan, was made with a tomato-based curry. At Aslam Chicken Corner, there were no tomatoes, just perfectly grilled chicken tossed in rich butter. It was eaten by pinching pieces of chicken between slices of freshly baked flat bread.

With butter dripping off my fingers and chin — which, in retrospect, seems like a good problem to have — Anubhav and I ducked into a dark alley to discover pot after pot of steaming biryani. I’m sure it was good. In fact, I’m sure it was amazing. But after a couple of bites, stick a fork in me — I was done!!!

After a final stop for dessert, which I could barely touch, I bid farewell to Anubhav, certain in the knowledge that I had given Indian cuisine my all… and that I would be declining my airline meal! 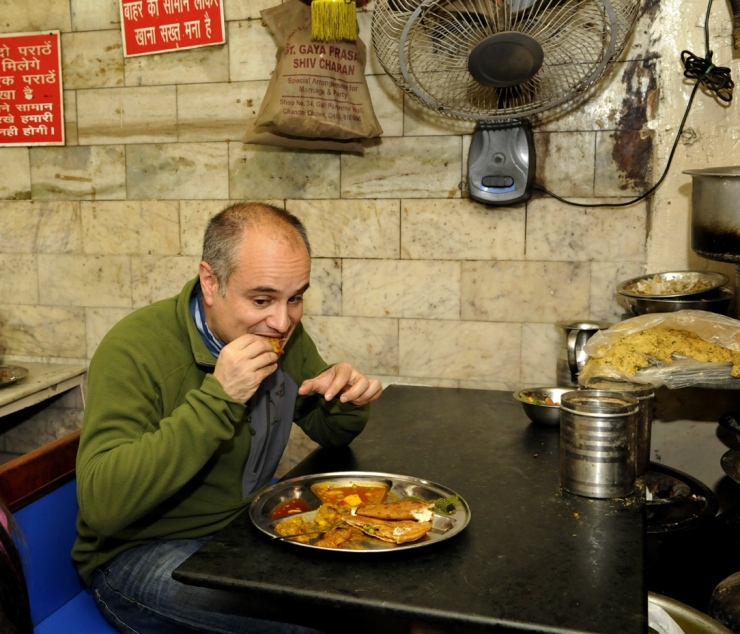