Charleston, South Carolina is my kinda town. Dating back to 1670, it’s quintessentially southern, gentle and welcoming, and oozing with rich history, great architecture and its own brand of low country cuisine. Yet so many years after it became one of North America’s earliest settlements, and long since the end of the Antebellum era and the plantations that dotted the countryside (bringing with them great wealth — and the slaves on which it was built), Charleston remains a vibrant city and university town, home to the well-dressed cadets of the Citadel and the decidedly less so undergrads of the College of Charleston.

Now I must confess something up front. Some poor planning on my part kept me out of Husk and Fig, two of Charleston’s premier dining establishments. A bit of a disappointment, for sure, but also an excuse to go back. But lest you think we starved for two whole days, perish that thought right now.

Our first stop in Charleston was SNOB — that’s Slightly North of Broad, as in Broad Street, for the unindoctrinated. And what better way to kick things off than some pimento cheese, the “caviar of the South,” followed by shrimp and grits. This classic South Carolinian dish achieves much of its richness from a healthy double dose of sausage and country ham, which are sautéed with fresh shrimp and  poured over perfectly creamy yellow grits. Well meaning people can (and do!) disagree on proper shrimp and grits and SNOB’s may not be completely traditional, but they were completely delicious and a perfect introduction to this southern city and its unique kitchen.

Now, I never thought a donut shop would make my list, but I’m a man who believes that first and second breakfast are two of the most important meals of the day. And on my final morning, serendipity would bring me to Glazed. A word to the wise: get here early! My friends Meredith and Amy would arrive at 11… only to find it sold out! I got there a tad earlier and, while tempted by some unconventional flavors like maple bacon and yogurt parfait, opted for the simplicity of raspberry glaze. 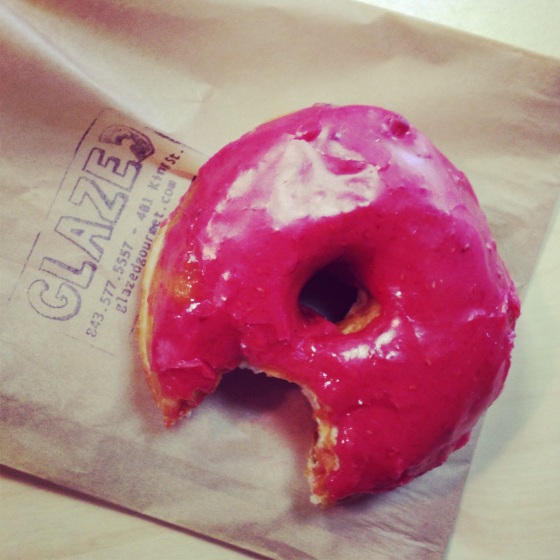 The donut was light and fluffy and the glaze was bursting with fresh raspberries. For a moment, I almost thought it was health food. Which is more than I can say for…

…second breakfast! That came in the form of a “Big Nasty Biscuit” from Hominy Grill, an establishment popular with locals and tourists alike. Perfectly fried chicken, topped with a rich sausage gravy and cheddar cheese, sandwiched between a freshly baked biscuit. After finishing my last bite, I knew it was time to go home. 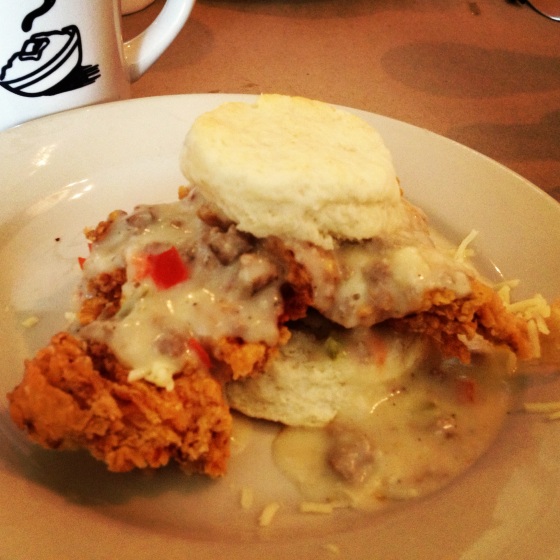 Charleston, I’ll be back soon!